Congratulations to all the dogs and their handlers, trainers and owners!!

This page, to the best of my knowledge, accurately identifies all the GSD with championships in herding/stockdog.   If anyone one knows of any additions or corrections, please contact me.

Disclaimer: This list is not complete as to the suffix titles, especially those earned after the championship, nor is it intended to be.

The American Herding Breed Association sanctions trials in the US and Canada and has recently expanded into Europe.  The champion of herding title that they offer is called Herding Trial Champion, abbreviated HTCh and often pronounced “hitch.”  After a dog has earned its first level III title, it becomes eligible to earn points on any AHBA level III course or stock regardless of whether it has finished the additional title.  A point is earned for every score of 80% or above, but no more than 3 points may be earned on ducks, geese or turkeys.  Points must be earned under at least three different judges.  Thus, with 2 legs per level, it takes a minimum of 12 qualifications to earn a HTCh.  The HTCh program was instituted circa 1996, but ABHA allowed retroactive earning of the title.

The Australian Shepherd Club of America is the foundation club of the Australian Shepherd, which actually originated in the western United States.  ASCA allows Other Breeds to compete in their trials and to earn titles.  ASCA sanctions trials in the US, Canada and Europe.  An ASCA Working Trial consists of three main levels (Started, Open and Advanced) which the dog must progress through.   The stockdog championship title that they offer is called Working Trial Champion, abbreviated WTCh and often pronounced “witch.”  A Working Trial Championship is earned when a dog completes Advanced titles on all three stock (cattle, ducks, and sheep).   It is not point based, but rather versitility based.  Thus, with 2 legs per level, it takes a minimum of 18 qualifications to earn a WTCh.

HC Marathon's Power of One HSAdc HXAs
Natasha Sullivan, earned on As, finished in 2013

The American Kennel Club covers the United States only.  The championship of herding title that they offer is called Herding Champion.  The regulations originally stated the abbreviation as HCh, but the AKC claimed ot be unable to chance the data base field size from 2 to 3 so changed it to HC.  When AKC went to course & stock specific titles, it started droping ALL lower herding titles from a dog’s name once it gets its HC, despite their being no regulation for this.
The AKC herding program began in 1989. Points for the HC were originally earned for only cattle and sheep.   However, on June 1, 2001, one became able to earn points on ducks as well.  Points for the HCh is based on the numbers of dogs beaten at a trial. For 3-6 HX dogs, 2 points are earned for 1st and 1 for second.  For over 20 HX dogs, points are earned for 1st, decreasing down to 1 point for 5th.  If a dog runs in more than one advanced class at a trial, only its highest score counts in determining points, and the dog is counted only once in terms of determining number of dogs competing.  Points can only be earned in a class/stock the dog already has advanced title on.  To get the HC, a dog must earn 15 points, including 2 firsts, one of which must be worth at least 3 points.  Given that it takes 3 legs to get the advanced title required before earning points and the maxium points one can get at one trial is 5, the mimimun number of qualifications needed to earn a HCh is six. 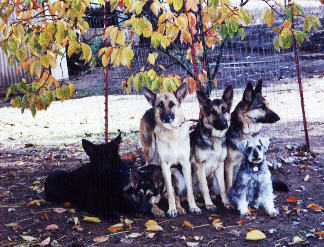