Drazi has many HIT, RHIT, High Combined and High on Stock
on a variety of courses and stocks.

Drazi was a black without any tan until about 6 months old.  Eventually, she had tan between her toes and lightly dusted on her legs.

Drazi died of gastric torsion just 2 weeks shy of her 9th birthday.  I suspect it was precipitated by a bad bag of Purina Shredded Blend, as all the other dogs fed it threw up and one even ate around the shredded bits. 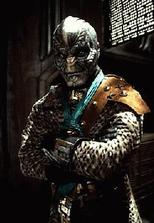 Etiology (or What’s in a name): In keeping with my tradition of giving my dogs scifi names, Drazi gets hers from an alien race on Babylon 5.  An individual Drazi is pictured to the left.

Drazi was a calm, powerful, confident, stock dog.  She had a Clint Eastwood attitude on cattle.  She would apply some pressure and then release it just a bit and wait for the cattle to move off, her tail wagging.  Drazi seemed to be saying, "What's it gonna be punk?  Are you going to move off or are you going to challenge me and make my day?"  The cattle would always move off.  She had an excellent heel bite and never got kicked while trying to heel.
Although Drazi often refused to work ducks in a trial, on the days she would put her heart into doing so, Drazi was an absolutely stunning duck dog.  I remember one time, her just standing in the middle of the small duck arena nodding her head to put the ducks through the obstacles.  Another time the stock handlers came out and hugged her after a run because she had done such a great job of putting the ducks through the course without stressing them.
Drazi drove as well as she fetched.  The biggest problem that I had with her was that it could be hard to get her to take a flank.  Indeed, her not taking a flank is what cost us a Q on all of our PATDc runs, for she had good control of the cattle, just wouldn't flank and make the turns (VBS).
Drazi had stronger eye than most GSD.  As a consequence, she had less of the roving eye more typical of the breed.

Links to pictures of Drazi

Drazi's Facebook album Alas, you may not be able to view, if you don't belong to FB.