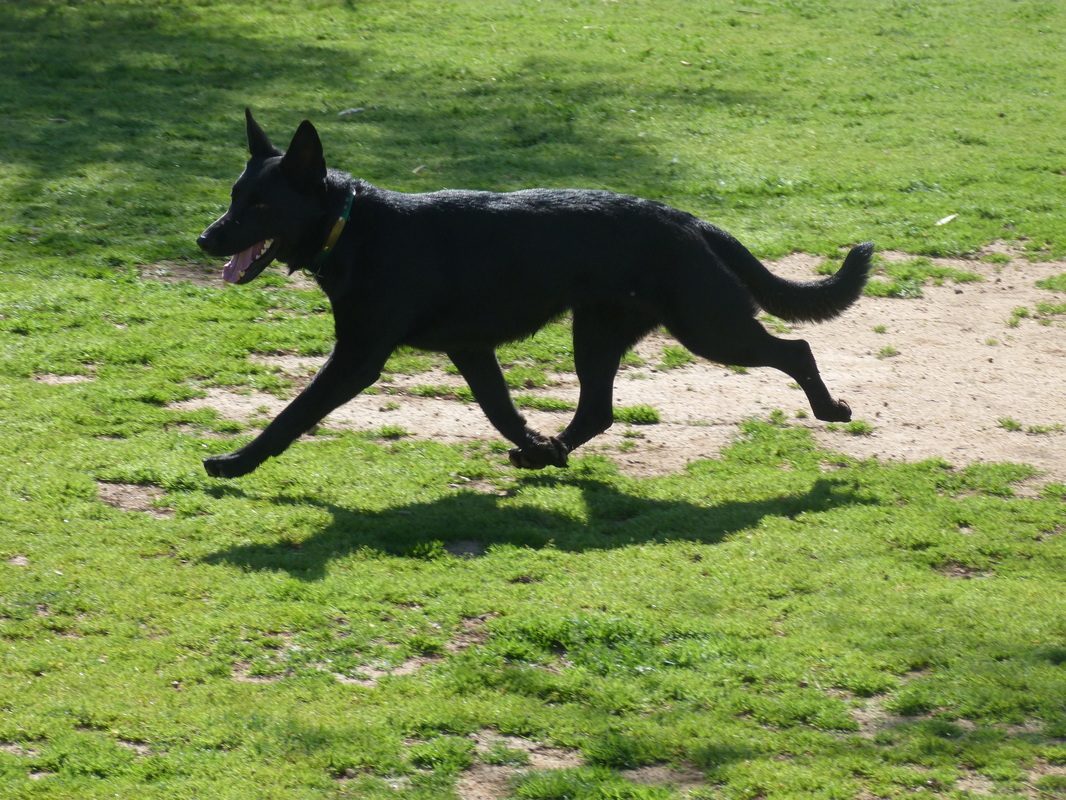 The Brigadier in a Flying Trot. Note how the disconnected shadow shows that she is truly totally in the air. This bitch loves to move with speed.

Briga has competed only a limed number of times due in large part to my  limited finances.  One of her HSAs runs was just phenomenal with a well deserved score of 98/HIT.  Another was pretty good too with a 4th out of 13 dogs.  On both those runs, the stock dog had a lot of problems getting the sheep to set, did a lot of running them around, but Briga not only held her position, but stayed calm.  The third run, well she was in heat and a bit zoomy, but still managed to Q.

She is a real cool dog and picks up things very quickly.  She's a real thinking dog and a lot of fun to work with.

The Brigadier is a UKC Show Champion (CH).  One of the judges went on about how exquisite she was with her beautiful flying trot.

Etiology (or What’s in a name):
In keeping with my tradition of naming my dogs after science fiction characters,
Brigadier is named after Doctor Who’s Brigadier General Sir Alistair Gordon Lethbridge-Stewart aka “The Brigadier”

Holding goats in corner -  Briga holds Nigerian Dwarf Goats in a corner.  Two of them are rather aggressive towards her, but she does not back down and gives out very measured corrections to them.  I just love the way she is tough but gentle with them at same time and works with a very clear mind.  Many dogs would be chased off by these goats, but a good stock dog must be able to keep stock held when needed.

Herding fetching training - I had been working Briga very sporadically for a several months.  This video marks her first work before I begin more regular training.  The idea is for her to keep the Nigerian Dwarf goats coming to me when I move and to pull off and hold when I stop.   In this video, Briga is working too closely and I am using the stick a lot to try to get her wider or to prevent her from circling me.  The goal is to hit the ground, not the dog.  The only time the soda bottle at end of stick makes contact with dog is with a pushing motion, not as a strike.  I flick stick behind puppy’s shoulder each time I turn to “square up” her turns.  Briga is slow to come to a stop when I stop and is frequently thinking about going in for a joy grip.   The one time she actually dives in for an inappropriate grip, I completely remove her from the livestock.  Note how I step on/grab rope when I catch her up.  At end of stock work session, I do some obedience with the stock still present, though out of frame.

Herding fetching training plus 2 weeks - I begin the current session with line wrapped around a post.  I do not release dog until she has settled and cleared her mind.  You can see I am using the stick less aggressively than I was in the previous video, because the puppy is thinking more about working stock.   She is now working much wider and calmer.   Not only am I no longer having to really work to get her to pull up when I come to a stop, but she is anticipating it and doing it on her own as I approach the fence.  This video ends with work on the command “close” (= remain in my general vicinity {even if I move around}) in the presence of the livestock.

First time working cattle   Brigadier works cattle for the first time.  One of the heifers keeps challenging her and Briga wins each challenge without any back up from her handler, Dot DeLisle.  This heifer will charge a dog if she reads any sign of hesitation or weakness.  At times, all Briga needed was a step forward or a flick of her head.  At other times, she snapped or delivered a well-aimed grip to the nose.  All grips were executed with the ideal quick release.  When Briga redirected her attention to me, it was usually because of rope pressure.

Second time tending a graze Part 1     Part 2     This is Briga’s second time tending a graze although she had several sessions of  walking  up and down the furrow border on leash before being let off it the previous session.  She settled right in without me even having to use the stick to keep her out.  (I only had to use it for less than 5 minutes the first time.)   She is tending alongside experienced dog Karu, who has the goats so well trained that no one attempts to leave it despite there being much better stuff to eat behind the dogs.  You’ll probably find this video boring as Briga already understands the job and Karu has not left a lot of active work to be done.  But note that both dogs are always watching their stock, even when laying down.

1st Solo Graze Tending  12-month-old German Shepherd Dog, Brigadier z Diehlomov, solo tends a graze for the first time.   Previously, she twice tended along an experienced dog and prior to that had several sessions walking along the furrow on a leash.  She is doing an excellent job of communicating with the 8 Nigerian Dwarf goats as evidenced by none of them attempting to leave the mostly eaten down weeds for the green oat plants on the other side of the border. Whenever the goats are eating at the border, they ARE thinking about crossing over it. The sparsest part of the graze is along the border.


First time competing.  Herding Started A course Sheep. Brigadier had a terrible set out for her herding competition debut.  She held her down firm despite it taking the stock dog a long time to sort of get the sheep to the set out hay.  But they were widely distributed around it which may have been the reason Briga crossed over on the out run.  Handler Dot DeLisle wasn't going to let her get away with it and was able to call her back and resend.  Briga overflanked in the beginning of the fetch, but once Dot gave the "slowly" command, she settled down and kept herself the proper distance off the stock.  Despite the major loss of points in the first section, Briga ended up 4th out of a class of 12 because the rest of the run showed how a good stockdog should work.  Not bad for her 4th time having even seen the A course.

Second time herding turkeys.  Thanksgiving 2013 flock of Bourbon reds.  Unfortunately the first time, the day before, the video failed to save properly - AUGH.  Briga has refused to work geese, so I was happy to see her so wanting to work turkeys.  This pen is way too small, the turkey leaping behavior is due to the pressure of the too small pen.  She could have slowed down a bit, but overall did a great job for her turkey start.  And didn't cause any to go on the dinner table after all.

Here Briga competes on the AHBA Ranch Large Flock Course level 1 (RFLI-s) with thirty some sheep.  We are running the French Course under France's Commission d'Utilisation Nationale Chiens de Troupeaux (abbreviated CUN Troupeaux).  Professional shepherd and CUN Troupeaux judge Jean-Luc Vadakarn came over from France to design the course and judge the trial.  The Brigadier easily qualified on both her runs.  Be sure to read the full description under the video.

click here   Unfortunately, you may not be able to view it, if you don't belong to FB.